We regret that the original version of this article had a racially-offensive characterization. This in no way represents the values that we aspire to in this community or association.

One of the many things that makes Virginia-Highland great is our diversity. We celebrate that diversity and want everyone to feel welcome in our neighborhood and valued by the civic association.

It takes just one time…

Inman Middle School has four morning crossing guard posts in the morning, two staffed by APS employees and two by neighborhood volunteers. One volunteer position is on the corner in front of the Field of Dreams; the other at the Clemont-Cooledge crossing.

There have been days when the Field of Dreams position has been unguarded because there simply are not enough volunteers. It’s usually the last one filled. Still, there is a light there to get kids across—it’s not as terrifying as crossing Virginia right in front of the school, where there are buses stopped, and westbound cars coming down Virginia turning right onto Park, and eastbound cars turning left on to Ponce de Leon Place, and stopped traffic obscuring views.

Sometimes I have worked the Field of Dreams position thinking how quiet it was for the most part.

This morning I responded to a last-minute call to staff the Field of Dreams position and I am so glad I did because of what I helped prevent.

The sun was really bright this morning, and it had risen pretty much to eye level, so that cars and pedestrians heading east on Virginia could hardly see anything. In fact, one student I escorted across Ponce de Leon Place toward the church crossing screwed up her eyes so tightly they were barely open.

At the height of the morning arrival to the school, a fire truck suddenly roared up Virginia from the west, sirens blaring. I made sure the children did not attempt to cross Ponce De Leon Terrace (especially since the pedestrian light was red anyway!). As the fire truck sped up Virginia past the school, its siren still blaring, the pedestrian light changed. Presumably safe now to cross, on multiple counts.

No one heard another, smaller emergency vehicle racing up Virginia, its siren blending in with the one that had just passed. The children, and the drivers coming  up Virginia, were all blinded by the sun. As the children started to step into the crosswalk, I gave one last glance down Virginia, just in time to see the second emergency vehicle, which was going very fast, start to turn right onto Ponce de Leon Terrace, its siren drowned by that of the receding fire truck. I urgently blocked the children’s path until the vehicle had turned. All happened in just seconds.

What if I had not been there? The children could not see properly. The pedestrian light was green. The emergency vehicle barely slowed down to turn right, if at all. I think it would have been a disaster.

I have seen children crossing there in the morning when there was no guard—I can see down there when I am standing at Clemont. It always looks quite routine.

It just takes one freak situation. Or one irresponsible driver coming through at just the wrong time.

How to volunteer
If you would like to help out as a crossing guard, email transportation@inmanmiddleschool.org. They really need more. You can do it as often or as seldom as you like. You simply sign 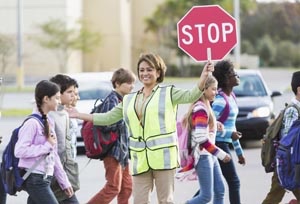 The children can be quite charming. There was one boy this morning who came up the Virginia sidewalk from the west on his skateboard. A very colorful skateboard, indeed. He clearly loves it. He told me that he skates all the way along the BeltLine from Irwin Street.

And there are cyclists. And musicians carrying their instruments. And children carrying in phantasmographic artwork and outlandish cutouts.

It’s fun being a crossing guard, and it’s important.
For more information: http://inmanmiddleschool.org/crosswalk-parents/.

/ About Author
More posts by

Download PDF (2.4 MB) – the fate of Summerfest will be decided at the December VHCA meeting: Should we enlarge…

Congratulations to Grady High School, Inman Middle School, and Springdale Park Elementary School for being among those awarded grants by…

Regarding Atlanta Public School redistricting, the VHCA hosted a cross-cluster neighborhood meeting on June 27, 2012. The goal of the meeting…

The Virginia Highland Civic Association will host a forum on the Grady Cluster’s middle school capacity. Please come prepared to…

This meeting at 7 p.m. at the Hillside School (enter from Monroe Drive or Courtenay Drive) will feature a report…